Arla Foods in Rødkærsbro, Denmark, previously used free-blowing evaporators in their production and storage rooms. This led to all kinds of troublesome draft and noise problems, especially in the picking room, where gusts from the evaporators were actively impeding  employees’ efforts. Arla Foods turned to Euro Air for a solution.

Our low impulse Permeable System was a perfect match for Arla’s picking room. Our textile ducting eliminated the high frequency buzzing and disruptive noises that had once come from the vibrating metal of the evaporators. And the low velocity, even air distribution of the Permeable System put paid to those problematic drafts, improving the productivity of Arla’s picking room staff.

The solution was Euro Air’s Nozzle System. We installed a permeable textile duct with 2 rows of nozzles. This was capable of delivering the volume and velocity of air necessary for the product storage area, while still providing a comfortable, low-velocity air flow for the employee section.

A portion of the cold air flowing through the duct was diverted through the high-impulse nozzles and directed toward the food products, while the remainder was allowed to escape through the permeable surface of the duct, falling gently into the inhabited area of the room below.

After 6 months, Arla Foods reported back that the system worked so well that they no longer noticed it at all.

The Espersen fish factory in Denmark used to rely on ceiling mounted calorifiers to warm up their production areas in winter. These calorifiers caused problematic drafts which periodically delayed work. To keep production steady, Espersen had little choice but to turn off the calorifiers, which of course resulted in room temperatures that were well below specifications. It was a no-win situation for everyone involved.

To make matters worse, in the summer time temperatures would rise due to a lack of effective cooling. Espersen desperately needed to provide air conditioning, but couldn’t risk introducing further disruptive drafts. They turned to Euro Air for a solution.

It was clear that Espersen’s problems couldn't be solved with a standard ventilation product. They needed two completely different applications, one design for cooling in the summer and one design for heating in the winter. Euro Air’s Membrane System provided just that.

The Membrane System combined low velocity cooling and draft-free heating in a single textile duct. An internal membrane sewn into the length of the system allowed Espersen to switch seamlessly between cooling and heating modes. Cool inlet air permeated through the textile surface of the duct while cooling, and warm air was directed into high impulse slot diffusers while heating. Problem solved.

The system has been in place for several years, and in all that time Espersen hasn’t had a single issue with drafts. 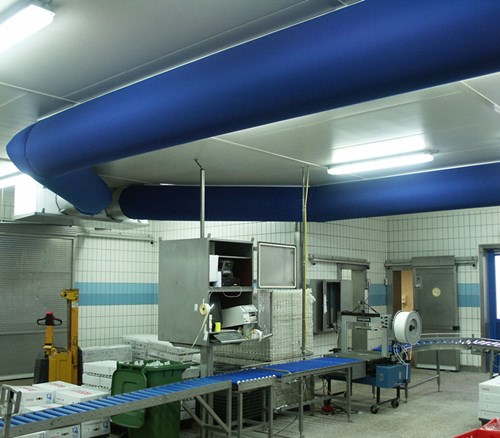 Auditoriums and Cinemas
Euro Air provides a wide variety of specialized air distribution systems, each one featuring a dynamic modular design. With so much flexibility, a bespoke solution for any showro...
Read more

Schools
A good indoor climate is essential for any space designed to maximize the comfort of large crowds. Schools and child care facilities in particular function much more effectively ...
Read more

Showrooms
Euro Air provides a DFC System to help the famous CliniClowns in Holland to entertain sick children  The CliniClowns are a group of entertainers committed to livening up the l...
Read more