A good indoor climate is essential for any space designed to maximize the comfort of large crowds. Schools and child care facilities in particular function much more effectively with better air distribution, and yet, poor indoor air quality in public schools is an all too common problem.

Classrooms are usually measured in terms of the number of students per square metre. The higher this number, the higher the level of CO2 in the ambient classroom environment. Studies confirm that poor air quality and elevated CO2 levels have a direct negative impact on students’ educational performance.

Since April, 2007, the Danish Working Environment Services has carried out air quality tests in more than 1,300 Danish schools. They found that one out of every five schools suffers from CO2 levels exceeding the advisable level of 1,000 ppm.

At Faaborg Sundskole the CO2 level was measured at more than 1,900 ppm before the beginning of a two-hour class.

10 minutes into the lecture, the CO2 level had risen to over 2,000 ppm. The Danish Working Environment Services advises that exposure to concentrations of CO2 this high be limited to only very short periods throughout the day.

By the end of class, nearly 2 hours later, the CO2 level was measured at over 3,500 ppm. Unsurprisingly, both teachers and students at Faaborg Sundskole suffered from frequent headaches, a lack of concentration, atypical weariness, dry eyes, and a self-described lack of motivation.

An experiment at Rungsted Skole in Denmark was carried out with students from the 4th to 6th grade (about 10 to 13 years old). The students were asked to perform a series of written tests in two rooms, one with an ambient room temperature of 25°C and one with a temperature of 20°C.

Students of all ages experienced an improvement of 10-20% on their exams in the cooler of the two rooms.

At the same time, a test was conducted to measure the impact of introducing fresh air into classroom environments. An increase in the fresh air rate from 10 m³/h to 36 m³/h resulted in a similar improvement of 10-20 % on the students’ exams.

These studies confirm that improving the indoor climate of public school classrooms can improve students’ educational performance by up to 18% (Source: DTU).

To improve the indoor climate of public school classrooms a large amount of fresh air ( roughly 20 m3/m2/h) is typically required.

While traditional ventilation systems are more than capable of supplying such an air exchange rate, they’ve proven to be both prohibitively expensive and (thanks to the drafts and noise produced by their high-velocity diffusers) unintentionally disruptive.

Euro Air’s textile ducting solutions can also be used with a VAV/DCV system responding to the CO2 content of a given room. This setup activates the ventilation system only when it's required, cutting down costs and saving power.

The school’s science classrooms were plagued by poor indoor air quality, and the sensitive nature of the educational lab equipment they often use meant that traditional ventilation systems weren't an option. Luckily, Euro Air was.

Euro Air supplied one of the school’s science classrooms with our DFC Induction System, a hybrid system supplying air through both the permeable textile surface of the duct as well as through a series of laser-cut perforations and directional baffles.

After installing the DFC Induction System, the highest measured CO2 level in a class of 77 people was just 660 ppm, while the average CO2 level throughout the day was even lower at just 492 ppm—well within the recommended range.

More importantly, the system’s impact on students and teachers was exceptional, with both groups praising the improvement made to their classroom.

Since working with BLT Luchttechniek, Euro Air has gone on to successfully install textile ducting in schools all over the world, both in new and retrofitted buildings. We look forward to continuously providing a better indoor climate for educators and students in the years to come. 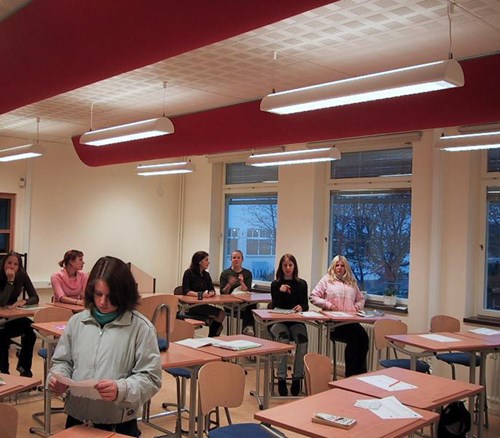 Auditoriums and Cinemas
Euro Air provides a wide variety of specialized air distribution systems, each one featuring a dynamic modular design. With so much flexibility, a bespoke solution for any showro...
Read more

Showrooms
Euro Air provides a DFC System to help the famous CliniClowns in Holland to entertain sick children  The CliniClowns are a group of entertainers committed to livening up the l...
Read more